My dental hygenist introduced me to her new toy last week. ‘Are you alright with the water jet?’ she asked. ‘Try me,’ I said. ‘See how many times I jump.’ Though I said introduced, I have come across these things before and I remember not liking them very much. That was some time ago, and this time I managed to convince myself that last time a) it was a different hygenist in a different surgery, b) it was probably an older machine, and c) I was probably feeling particularly wimpish on that day. Five minutes later (I actually handled a whole five minutes of the thing), she had pulled me off the ceiling and reverted to the more traditional teeth-scraping techniques which, after the jet, felt remarkably gentle and painless.

I have it on good authority that the water pressure at the tip of these plaque killers is over 6 bar (90 psi). This is around three times the pressure in a car tyre and more than the working pressure of Jennie’s boiler. I know that, because I was trainee fireman at Amerton for a few hours the other week. 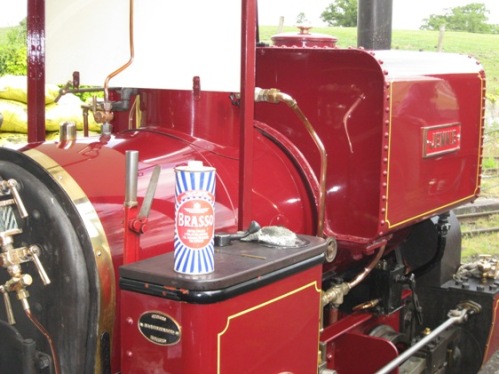 Note the size of the tin of Brasso. Now I remember why my arms hurt.

This site uses Akismet to reduce spam. Learn how your comment data is processed.