McGonagall again (or not, again*)

Sir Garnet Wilson LLD
Established a garden for the good folk of Dundee
The great man was Lord Provost and so for good measure
They preserved the tree that he looked on with pleasure.

Now the Botanic Garden fills the good folk with gladness
For the City of Dundee has known such great sadness
From parts of the garden they all have a view
Of the long Bridge of Tay, not the old, but the new.

The world has all heard of the old bridge’s fate
When many lives and a train were plunged into the spate
The bridge was affected by terrible weather
And despite many rivets it did not hold together.

(With apologies to WTMcG and Sir Garnett W. Couldn’t resist it. The plaque’s wording (click on it) is so McGonagallesque).

This isn’t the first time I’ve been on about ethanol added to fuel. As I said here, amongst other nasty things ethanol does it absorbs moisture from the air. The moisture gets into fuel tanks and the fuel system and causes corrosion. The photo shows one of the float chambers from the carburettors on my BMW R80 motorbike. The last time I checked these chambers, about a year ago, they were clean. Because of a little incident with petrol flooding out over my shoes I have just checked them again. From what I have read about ethanol in fuel, the UK Government doesn’t think there’s a problem, despite having commissioned an independent report that concluded:

“Based on the experience of other markets where E10 (10% ethanol in fuel) has been introduced it is estimated that the majority of vehicles ten years old or older will not be compatible with E10 due to fuel system material incompatibility issues. Field experience, vehicle trials and laboratory testing have demonstrated carburettor vehicles and powered two wheelers will suffer problems due to material incompatibility, corrosion and drivability problems…”Presumably not the answer they wanted, seeing that they have done absolutely nothing about it.

The price of grain is now inextricably linked to the price of oil. See here. One fifth of the US maize crop goes to make biofuels.

I whacked myself in the face with the end of a bungee cord the other day. I have always been wary of the things and take great care when I use them. I’m not talking here of the bungee cords crazy people tie around their ankles before they fling themselves off bridges, I mean the common or garden ones used (amongst many other things) to fix things to car roofs. Which was what I had done. And I’d done it properly, clipping the hook around the roof bars and back onto the cord, the same way I’ve done it hundreds of times. The cord was stretched as tight as it would go, and when I came to take it off I carefully and slowly (honest, Guv) unhooked one side. The hook at the other end came off and came at me so fast I didn’t even see it. I was lucky, it only split the skin on my chin, it could have been much worse. The frustrating thing is that I have no idea how it came off. The hook hadn’t bent, and must have slipped around the cord somehow. My son reminded me that years ago I warned him never to use bungees. In future I shall heed my own advice and stick to using ratchet straps. 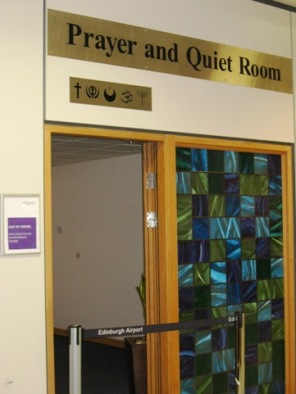 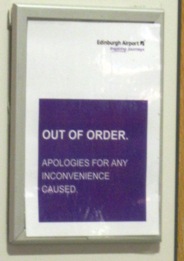 Tagged as edinburgh airport, Out of Order, Prayer and Quiet Room 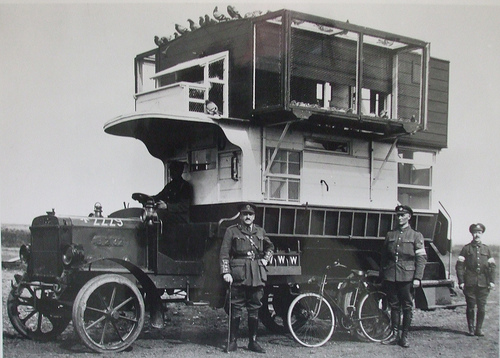 I was disappointed to hear recently that it is a myth that you can carry two tons of canaries in a one ton van by banging on the sides to keep half of them flying around. Apparently it won’t work because the van is a ‘sealed system’. So what about a van with mesh sides, would it work then? Or one mesh side. Or just a panel of mesh somewhere. Don’t get me wrong, I have no intention of carrying out this experiment. I don’t have a van. Or enough canaries.

(Yes, I know they are pigeons in the photo, not canaries. Could this be how the myth started?)

I have heard recently that Edinburgh is the seventh most congested city in Europe. This, as anyone who has attempted to drive through Manchester, Birmingham, Leeds, Glasgow, Bristol (none of which are in the top six) and several other UK cities will testify, this is complete, unadulterated, arrant nonsense. And what about Madrid? Rome? Paris? They don’t even figure in the top six. If you want traffic jams, try these cities, don’t pick on Edinburgh. Is it possible that these statistics were compiled at some time in the last two years, when Edinburgh’s centre was jammed solid with cars as a result of snarl-ups caused by the tram works?

Ah…! So let’s get it right. Edinburgh is NOT the seventh worst city in Europe for traffic jams. It was for a while, and there was a reason. It is not now. At a guess, it is way down the league table, I’m guessing around number twenty (on a par with Aberdeen and Amsterdam).

Believe me, after having lived in Reading (20 years ago) and having had to commute into London twice a week, Edinburgh is a mere pussy-cat in the cat-house of traffic jams.

A SatNav firm provided these statistics. SatNavs are the things that do this.