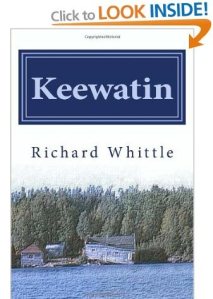 Many thanks to Charlotte for reading and commenting on three recent rewrites and edits of Keewatin. The novel is finally in paperback (there is also a Kindle version).

Keewatin is an adventure story set in Canada in the 1980’s. I wrote an original version for my son when he was eleven – though this published version bears little resemblance to the original.

To save you clicking on links, here is the book’s description:

Alex Mackenzie’s father disappears while on a visit to a mine in the Canadian north. Search parties fail to find him. When school breaks up for the summer, Alex’s friend Suzie invites him to fly with her to Toronto to stay with her aunt. It is a plan by her parents to get Alex’s mind off his missing father. In Toronto things go badly wrong. Will they be allowed to stay with their aunt, or will they be sent back? And what happened to Alex’s father? Keewatin takes the reader into the Canadian wilderness accompanied by an anxious Alex, a feisty Suzie and a truck called Mog. An adventure for older children and younger teens. Parents: A safe adventure story! Read and enjoyed by 8 to15 years.

No reviews yet… My first published novel, Playpits Park, had several 5-star reviews (see here). A few years ago I put a draft of Playpits on the Harper Collins Publishers website ‘Autonomy’. Here are the peer reviews.
Unlike Keewatin, Playpits is NOT a novel for children. Playpits Park has been downloaded for Kindle more than 5,600 times

Rankin’s pie and pint at the Oxford Bar

My ten year old granddaughter wants me to write another book for children. She knows I wrote three novels for her dad, and that he passed them around his friends when he was at school. She has read Keewatin, the first of the three, and now she is passing it to her friends. After she read it she said it was better than Harry Potter (if only that meant something in the real world!). Keewatin took six months to rewrite and then another two to edit, but it was worth it just to hear her comments.
Except for these blogs I haven’t written much original stuff lately. I am trawling through my older novels, rewriting and editing. It is a full time job and nowhere near as satisfying as writing new material. Every writer goes through it. The stuff you wrote years ago was put aside for reasons best known to yourself: stories that seemed to go nowhere, plots that got lost. There are moments of ‘did I really write that?’ – either because it now seems exceptionally good or appallingly bad.
Ian Rankin (Doctor Ian) is auctioning on eBay a pie and a pint in the Oxford Bar. In his company, of course. The last time I checked the site the bids had reached £460 (not much for a meal, judging by the money I saw being spent in St.James and Mayfair last week). All the money raised will go to Rankin’s favourite charity.

Constructing my website is like swimming through treacle. Not that I have ever engaged in that particular pastime (but imagination is all). I don’t want my site to look naff, which is why I am spending so much time on it. I have managed to get http://www.richardwhittle.com and http://www.richardwhittle.co.uk, which presumably means that the Man Who Talked To Hitler (hey – what a name for a new novel! Copyright – okay?) is presumably dead and buried and has no need for a website. Don’t bother to check my websites yet, you will only get the 123-reg holding page. Oh – and for those of you who asked for the name of my children’s novel, mentioned in an earlier blog, its name is KEEWATIN. Try Googling it, not for my novel, but for its setting.

Tagged as keewatin, richardwhittle.com, The Man Who Talked To Hitler

My ten year old granddaughter just phoned me. Over the school holidays she has been test reading my children’s novel, Keewatin. ‘I’ve just finished it,’ she said, ‘it’s really good. I loved the way it ended, the way they found …….’ ‘Only the way it ended?’ ‘No, I mean I loved it all, it was cool.’ ‘What did you like best?’ ‘It was like I was there. It was real.’ Then her mum’s voice in the background: ‘Tell him what you told me.’ Then GD: ‘It’s better than Harry Potter.’ ‘That’s daft. It can’t be. So why’s that?’ ‘It was like I was in the story. There was no magic, it was really real (sic).‘

Nice way for me to start to the day. To be fair to J K Rowling, GD has just finished a marathon read of all the Harry Potter books and has been watching the DVDs, so she is no doubt supersaturated with wizards and needs something different. Maybe other children are feeling that way about fantasies. Time will tell.

Ironically, when I wrote it in draft about ten years ago I intended it to be a ‘boy’s book’, to help address the lack of adventure stories for that age group. Then, perhaps stupidly, I put it away and turned to crime (well, you know what I mean), no doubt influenced by Ian Rankin’s growing success at that time. I told GD that unless I can get Keewatin published, then she will be the only one who will read it. She didn’t like that, she thought it was sad. I told her I would start attacking agents with it. She seemed happy with that.