Bikes*, bits and bobs. And snow.

I haven’t done much restoration work on the old police bike lately. I had hoped to have it finished by now but other things seemed to take over. I’m feeling rather like the man who said that when he retired he became so busy that he though about taking on a lad.

I did spend a few days on the bike in the summer, managing to paint most of the parts (the parts that needed painting, that is. I don’t mean the engine and tyres). It isn’t a case of blasting the bike with a Halfords spray can, it’s more a case of stripping everything to bare steel, removing the rust, sanding it smooth and then hand-painting it with primer, undercoat and three or four top coats, sanding it down between every coat to remove the brush marks. It takes time (far too much) but so far I have managed to undercoat most of the parts. Several large components (the frame, mudguards and petrol tank) have even had their first topcoat. Oh… and they now have another coat. It’s called dust.

I have also been messing around making a radio, a mock-up rather than a real one. I have been trying to get an original for years, but the only one I know about is in a museum and that, judging by their lack of response to my entreaties, is where it’s going to stay. Quite right too.

So here is my part-built replica. Like the rest of the bike, it’s unfinished. Note the dust.

*I know the bike stuff is boring, but a few people have asked me how the bike is getting on. Now they know it isn’t.

I suppose I should be out in the garage now, getting on with things. Trouble is, the weather is nasty and there’s another 5″ of snow out there to be shifted (not sure where to shift it to though, there’s not much room left) so instead I’ve been writing my novel. Like the bike, it’s time I finished it. 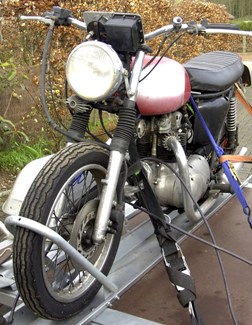 A few years ago I found one of the police motorbikes I used to ride. As you can see if you compare the top and middle photos, it bore little resemblance to my old constabulary bogwheel. The bike on the trailer is the same bike as the one at the far end of the lined-up trio. Well, not quite the same, as you can see. The bike on the trailer doesn’t look too bad, rust-wise. What you can’t see is all the rust under the chrome plate and the paint.

I removed the engine and stripped the bike down. Now I am about to reassemble it. The engine can wait, I shall do that when I have put the rest of the bike together. Engines are like people – no amount of looking at them from outside can reveal their inner secrets. The wheel hub’s inner secret (bottom photo) was scary. I’m hoping that the inside of the engine doesn’t look the same.

[For the few Triumph purists who read this blog – yes, the front forks are from a Honda. Luckily for me the owner had the Triumph originals.] 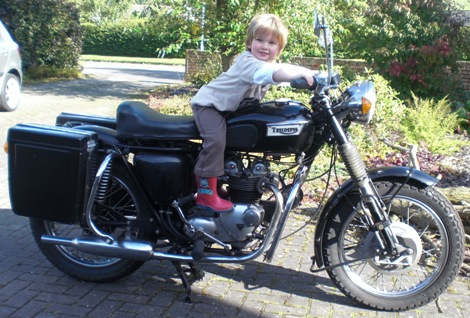 The bogwheel and the TYO…
He climbed on to it and said he couldn’t touch the pedals, which didn’t really surprise me. Then he told me he had managed to find some – he had his feet up on the spark plugs and looked like Dennis Hopper in ‘Easy Rider’ (not that I ever saw the film). Or Snoopy, who also appears to have his feet on the spark plugs.

The bike is 40 years old, a 1969 Triumph ‘Mercury’ (a police T100P for those that are interested). For reasons I won’t bore you with I am sure it once belonged to the City of London police, but somewhere in its history it lost its documents (‘ello ‘ello, lost its documents, you say? A likely story. You and me had better go down to the station…). A few years ago I stripped it down to its last nut and bolt and rebuilt it.

Anyway, it isn’t the police bike I’m currently rebuilding, that’s another one. At the moment that one is a garageful of bits.

So why ‘bogwheel’? I think it is a WWII army term. I first heard it in the police, from an ex-soldier who had been in Burma during the war. For motorbikes used out there I’m sure that ‘bogwheel’ was an appropriate term. Policemen who had been army despatch riders also called our bikes bogwheels.